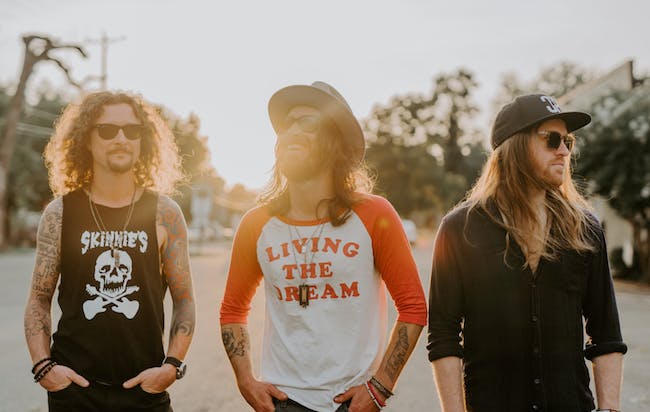 When it comes to straddling the line between rowdy country music and rebellious hard rock, no one does it better than The Cadillac Three. Name another band that can play a country festival with Florida Georgia Line or Keith Urban one day and then jet off to the U.K. to share the stage with Metallica or Slayer the next.

On the Nashville trio’s long-awaited fourth album, they push their country, hard rock and southern rock bona fides to the limit while also introducing elements of funk and soul. The result is a dirty, greasy and hard-hitting sound that can only belong to The Cadillac Three — one they've christened COUNTRY FUZZ.

But COUNTRY FUZZ isn’t just the name of the group’s new album. It’s also their aesthetic, the phrase that best sums up both the music and lifestyle of singer-guitarist Jaren Johnston, drummer Neil Mason and lap-steel alchemist Kelby Ray, three guys who have become closer than brothers while growing up and playing in bands together in America’s most buzzed-about music city.

“We’ve been COUNTRY FUZZ forever,” says Jaren. “When I think of Southern rock, I think of Lynyrd Skynyrd. When I think of country, I think Garth Brooks. This record and this band are all of that. But it’s also ZZ Top and Jerry Reed. It’s Medeski Martin & Wood and Prince. There’s no better way to describe who we are than Country Fuzz.”

“It’s not easy to land on something that is your own thing, but we’re proud to say we did that,” Neil says of the band’s sound. “It works for us in any direction that we’re going. COUNTRY FUZZ is anything from a stripped-down country ballad to a sludgy, riff-heavy rock song. And it’s also country-funk.”

“We’ve matured as musicians and as a band,” says Kelby, whose lap steel lays down the bass line for The Cadillac Three and is largely responsible for the trio’s one-of-a-kind vibe. “Our sound is second nature to us and that only comes from playing together for as long as we have.”

Averaging 140 shows a year, The Cadillac Three are perpetually burning up the highway, Traveling 40 out of 52 weeks. It’s grueling, committed work, but Jaren, Neil and Kelby wouldn’t have it any other way. Nor would the band’s fans, who make pilgrimages to see The Cadillac Three and will often catch an entire weekend’s worth of gigs. To reward that devotion, the group was adamant about giving their fans as many songs as they could on COUNTRY FUZZ.

The 16 tracks on the record touch on all eras of the band’s history, from the swampy stomp of their 2012 self-titled debut and the power chords of 2016’s BURY ME IN MY BOOTS to the polish of 2017’s LEGACY.

The trio wrote much of COUNTRY FUZZ, which they also produced, with their live show in mind. ”As many shows as we play, we still switch our sets up every night. We really try to do something different, and now we have 16 new songs that we can add in,” says Neil.

With its serpentine lick and Jaren’s thick-as-syrup delivery, “Slow Rollin” echoes the band’s most-played live song, the fan favorite “Tennessee Mojo.” The group wrote “Slow Rollin” on the bus before a show in Las Vegas, with Jaren plugging in and rattling the back lounge. “I had the amp in the back of the bus, and when you turn it to 11, it’s loud as fuck,” he laughs. “I wrote that riff and was like, ‘How the hell didn’t we write ‘Slow Rollin’ yet?’ It’s such an obvious TC3 song.”

So is “Hard Out Here for a Country Boy,” a tongue-in-cheek list of all the things that good ol’ boys deal with on a daily basis while trying to live “that slow life in a real fast world.” Chris Janson sings a verse and adds harmonica, while the band’s recent tourmate Travis Tritt lends his unmistakable voice to the commanding choruses.

“Heat” is equally hard-hitting. A fiery salute to a lady who’s as combustible as “in a bar fight with gasoline,” it slinks along on Neil’s rhythmic beat before exploding in a noisy breakdown that blends Kelby’s steel with Jaren’s guitar. Even so, Neil calls it more of a vocal song.”It’s a chance for Jaren to show off his voice and the way that it’s matured,” he says.

While the band still sing about cold beer, hell-raising and Saturday nights, the idea of maturity underscores all of COUNTRY FUZZ. The Cadillac Three have never been as cohesive a unit as they are here, with all three musicians seemingly sharing the same musically tattooed brain. When Kelby adds subtle slide in the stunning closer “After Last Call” to accentuate Jaren’s delivery, Neil instinctively knows to pull back and give the notes room to breathe. “We’ve always been pretty good at that,” says Jaren. “But we’re all focusing more on our instruments. I care more about playing guitar now than I ever have, and I’ve been honing that. And Kelby is figuring out different ways to make his lap steel work in the songs, especially with the funkier stuff.”

That new funky direction is readily apparent in the devil disco of “The Jam” and on the swerving “Blue El Camino,” two tracks on COUNTRY FUZZ that point to the future of The Cadillac Three. “When we started playing “The Jam” at soundcheck, I used the lap steel to build a bass line and glue together Jaren’s funky guitar,” says Kelby. “It’s a cool new sound for us”

“The funkier aspects of this record is where we’re wanting to go, but with big ol’ country hooks,” adds Jaren, “because that is what we’re addicted to from growing up in Nashville. We love country songwriting and huge hooks.”

Still, The Cadillac Three refuse to be categorized. Listen to the song “Labels,” a brilliant, succinct slice of songwriting from Neil with Corey Crowder and Luke Dick, that asks, “I wonder what you see when you look at me?” It’s a pulsing anthem, with Jaren repeating, “Nobody wants to be labeled,” and stands as one of the band’s most incisive songs.

Along with the heavy-funk explorations, Country Fuzz marks a first for the group: “Back Home” is the only song the group has ever recorded that at least one of its members didn’t write. Co-written by Craig Wiseman, James McNair and Chris Tompkins, the tune is a straight-ahead blast of country-rock nostalgia and proved irresistible to The Cadillac Three.

“I couldn’t imagine anyone doing “Back Home” more than I could us doing it,” says Neil. “That’s the true test of what is or isn’t a Cadillac Three song.”

“The story was so good and the syncopation of the lyrics flowed so well that I knew we could make it work,'“ says Jaren. “That song is a hit, but it’s still very much us.”

Without a doubt, The Cadillac Three know exactly who they are — and they say the same is true of their fans. It’s all one big community that’s summed up by Country Fuzz. The trio is even launching a clothing line under the Country Fuzz name.

“The Cadillac Three are at a place now where we’re not scared to take chances and see what we can actually become,” says Jaren.

“The path we’re on is the natural way we do things, making each album and idea bigger than the last one,” Kelby says. “It's like a pitstop on a motorcycle ride, where you stop here, grab a beer, look around, learn from it, and then keep riding.”

And COUNTRY FUZZ provides the soundtrack for that ride.

“This album has a little bit of everything, and you can see where we started and where we’re going,” Jaren says. “The Cadillac Three is evolving in a badass new way.” 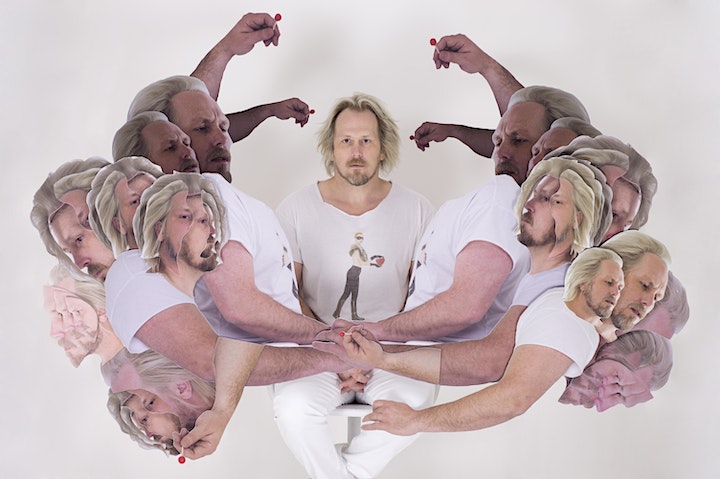 Hailing from Nashville, TN, Republican Hair conjures the flamboyant musicality of The

Cars, Devo, The Clash, and The Talking Heads, as well as the dark satire of author Kurt

Vonnegut and the wry observational wit of David Sedaris. Their debut album, High And

Don’t Care,” “Be Careful Chloe,” and “Who Is Chasing Who.” Within a narrative context,

Republican Hair waxes absurd and poetic about the apocalypse, courtship rituals, and

manners, among other things. Due to the controversial nature of these topics, band

membership must be kept classified. Fans and the government will be aware of the

group’s presence—either live, on record, or in videos—through its iconic, faceless logo

which boasts one of our country’s most beloved hairstyles. They just released their