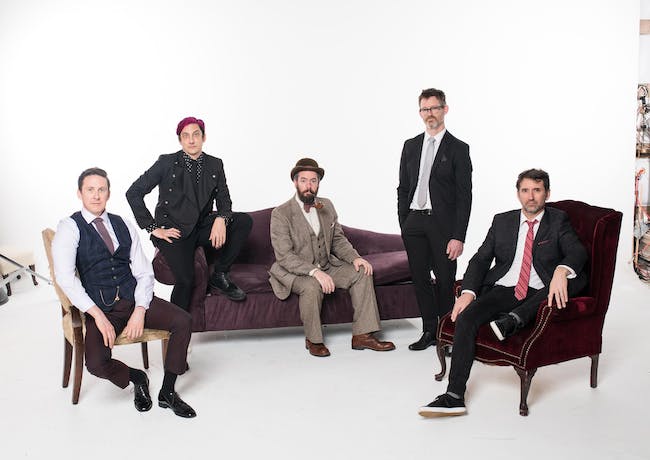 2019 marks the 25th year that Jump, Little Children is a “must see live” band known for its high-energy shows. With an eclectic mix of musical influences from ethereal chamber pop to guitar driven alt-rock, they have built a grass-roots following of devoted fans across the country.

“The choice to be a band funded by fans rather than a record label is something we take great pride in,“ says multi-instrumentalist Matthew Bivins,“Every band tells its fans that they couldn’t do what they do without them. In our case, our community is the reason we didn't stop at a handful of reunion shows. Being Jump, Little Children again is more than the excitement of recording and touring together. It’s the joy of being able to bring outside influences—other projects we’re passionate about—to the band, and sharing those influences with our community, too.”

What’s next for the band and its devoted following? “Sparrow” hasn’t even hit its first birthday and there are already new songs and ideas in the works. Most notably, the group has launched a self-proclaimed “experiment” on the crowdfunding platform Patreon. “It’s a healthy mix of hard-core nostalgia and a little taste of the future,” shares lead singer Jay Clifford. Every month, the band releases rare and never-heard live recordings, forgotten B-sides, and brand new demos. Clifford has taken on the roles of producer and host of “Cool Demo”, an audio documentary that dives deep into the making of“Sparrow” and often wanders to philosophical musings with all five members of the band. Become a patron at patreon.com/jumplittlechildren toexperience more of the band’s past, present, and future.

In December 2019, Jump, Little Children will launch a tour through its favorite cities along the East Coast and dipping into the Midwest. “These shows will be anything but ordinary,” promises bass player Jonathan Gray. “We learned in 2018 that while fans loved having new music to sing along to, they’ll always want some of our pre-hiatus noise. Porqué no los dos?” Gray is alluding to a recent performance dubbed “#LicMag”, an evening for 200 JLC super-fans in the intimate Queen Street Playhouse of Charleston SC where the band played its popular 90s albums “The Licorice Tea Demos” and“Magazine” in their entirety. The show was a blast, and the band hopes to do more like it in the future.

Surrounded by weathered ukuleles, a haunting steel guitar, and the lush, cinematic weight of The Brno Philharmonic Orchestra (Czech Republic), singers Danica Dora and Josh Kaler set off towards an uncharted archipelago on Hula Hi-Fi’s debut, “The Isle of Forgotten Dreams”. The record takes the best elements of Hawaiian music and baptizes them in a moonlit tidal pool of strings, electronics, and songwriting unafraid to chart the dark underbelly of the human heart. They call it ‘Hawaiian Noir’, an intimate sound full of longing and melancholy. The record took three years to make, and only came to exist thanks to a few people just crazy enough to try making it.

As a multi-instrumentalist and producer in Nashville, Josh Kaler had spent the better part of a decade helping other artists make their dream records. While working with everyone from Frances Cone and Jump Little Children to Matthew Perryman Jones, he was also toiling away at a personal love: Hawaiian music and specifically the lap steel guitar. In 2014 he met singer-songwriter Danica Dora when co-producing her EP ‘Together in Space’. Between other projects the two slowly started chipping away at this burgeoning hobby, sketching out the songs that would become the backbone of ‘The Isle of Forgotten Dreams’. When it became clear the project deserved more, they took their labor of love to the most obvious place for a Hawaiian concept album: the Czech Republic.

The world-renowned Brno Philharmonic Orchestra recorded their parts in 2019 and a process that had begun years ago was finally complete. Due for release in early 2020, ‘The Isle of Forgotten Dreams’ is an epic opening statement from an act that somehow mines the mystery of exotic locales to explore the uncharted emotions that lie sunken within each of us. They ached for a thing just out of reach... and grasped it.