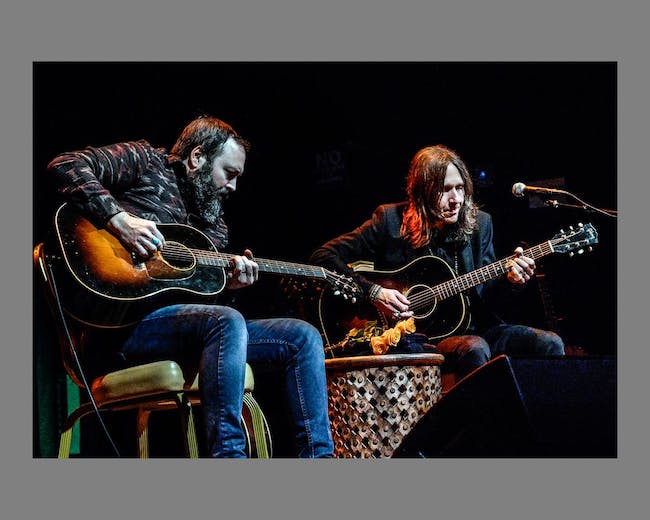 Charlie Starr, lead vocalist and guitarist for southern rock band, Blackberry Smoke, will be joined by longtime friend and musician Benji Shanks for an acoustic performance. Blackberry Smoke is in the midst of a landmark year following the release of their latest album, Find A Light. The album debuted as the best-selling Country and Americana/Folk album in the country, entered at #3 on the Billboard Top Country Albums chart and #2 on the Billboard Americana/Folk Albums chart. Along with singing and songwriting, guitar is one of Starr’s passions. In December 2017, Starr was named in Music Radar’s top 23 guitarists, a list that includes “rock guitar gods" like Keith Richards of Rolling Stones, Slash of Guns N’ Roses, and Billy Gibbons of ZZ Top, among others. Starr and Shanks will be performing intimate, acoustic arrangements of songs Starr as penned as well as other titles.

Unable to be encapsulated by a single title, Justin Brogdon is many forms of an artist….a singer, a guitarist, a songwriter, an entertainer. Listeners become captivated by the familiarity of the unfolding story lines in his songs, which share his perception of the daily tribulations in the lives which we all lead. Drawing from his own personal experiences with life, this artist creates a storyboard of imagery… pain, heartache, love, and passion.

Along with his soulful voice, Brogdon’s engaging stage presence is distinctly his own, and yet, there’s a familiarity about him that you can’t quite put your finger on. Honesty and candor onstage create a rapport with his audience, making him feel more like that of an old friend, than an entertainer. The influences of Justin’s musical career are a by-product of his parent’s eclectic musical taste. As a child he was exposed to everything from his mother’s R&B albums, to his father’s classic rock collections. These influences germinated Justin’s own blending of genres, resonating in a vintage rock sound with modern, infectious touch.

As the front man of Athens, GA based rock trio The Royal Velvet, Brogdon draws on influences from bands like Black Sabbath, Pink Floyd, and Soundgarden to create an original rock sound that has been compared to Queens of the Stone Age, Stereophonics, and Kings of Leon.